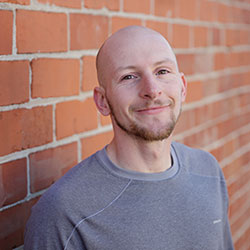 Trained in traditional fine arts and architectural drawing, Lukas brings an up-close and personal perspective to his work in design —from his pencil-and-paper mapping of intricate Renaissance geometries to his on-site experience in carpentry and construction. He enjoys getting his hands dirty so he can see how things come together. Lukas is especially interested in how we perceive the built world around us; it’s a skill he brings to his 3-D renderings, which he crafts to create a real sense of what it’s like to be inside the spaces he imagines. As a designer, Lukas is consistently attentive to the subtle architectural features that make people’s lives better. As a member of the Amato team, he feels a sense of awe at being able to shape the neighborhoods we serve with projects that may last longer than our lifetime.

Our world is so chaotic, but home is a place where you can be centered and decompress. It’s very important to have spaces that encourage you to be mindful and to feel at ease.

Lukas studied Architectural History and Theory at Marywood University, where he designed his own major with courses on fine arts and digital media. His education included a year in Italy, where he studied Architectural Drawing at SACI-Florence. Lukas comes to Amato Architecture from Ernst Brothers & Bluebell Kitchens, where he worked as a visual designer, and from Studio Geiger Architecture, where he worked on projects in Philadelphia and New York City. Outside the design studio, Lukas is a multi-instrumental musician who enjoys playing indie rock and jazz. He’s also an active outdoorsman who loves scaling rock walls and cutting a path across the landscape on his skateboard and snowboard. He’s currently volunteering for Habitat for Humanity and designing a new house for his mom.